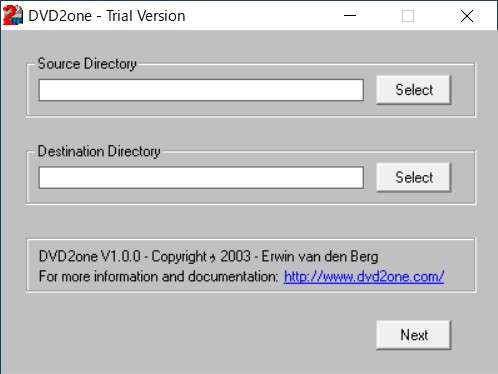 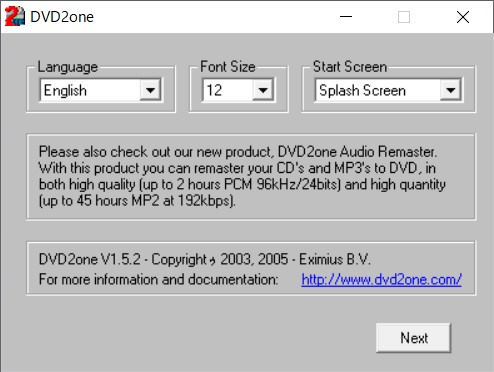 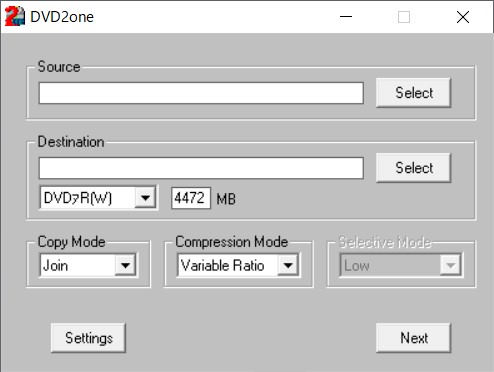 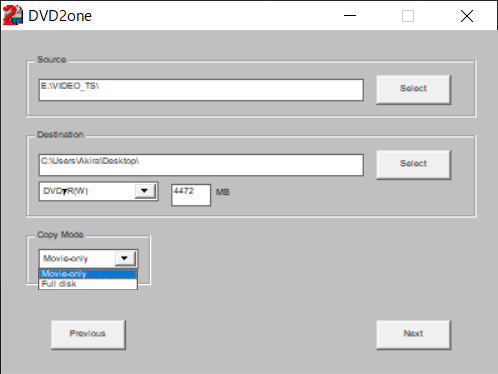 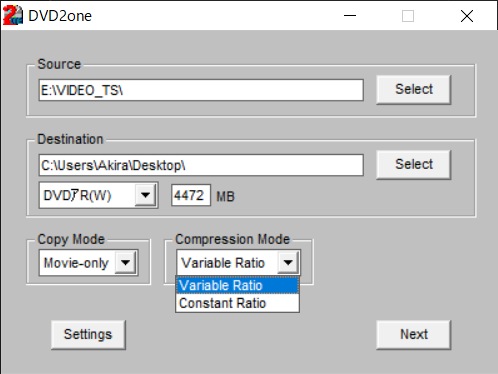 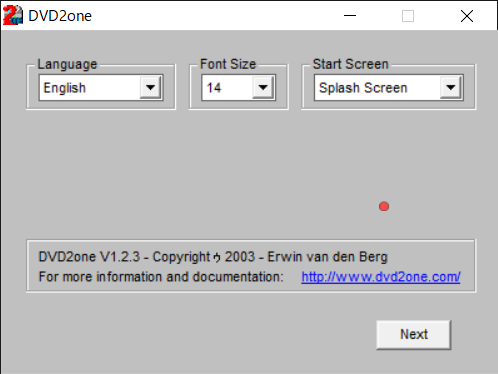 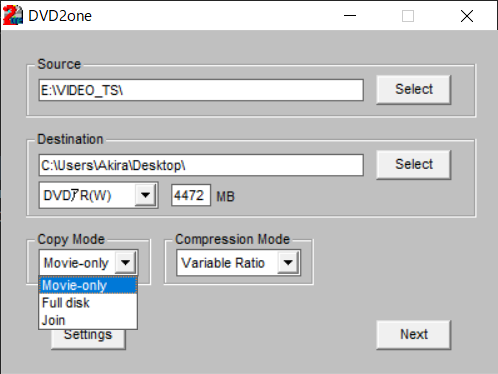 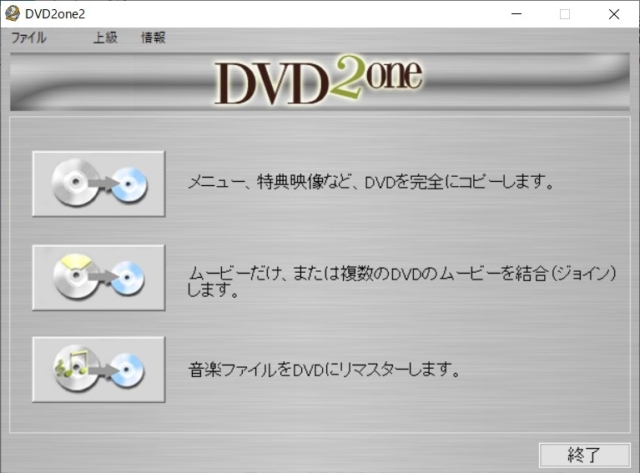 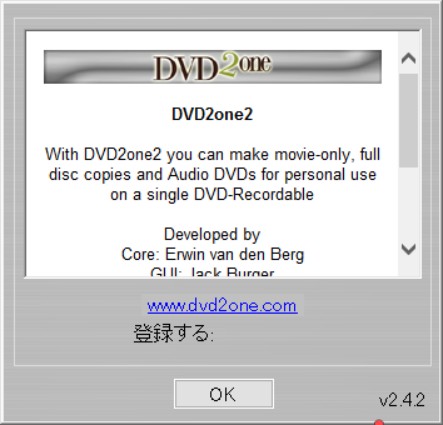 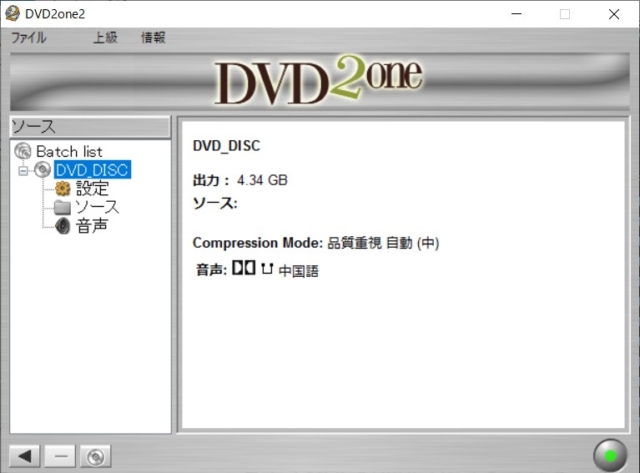 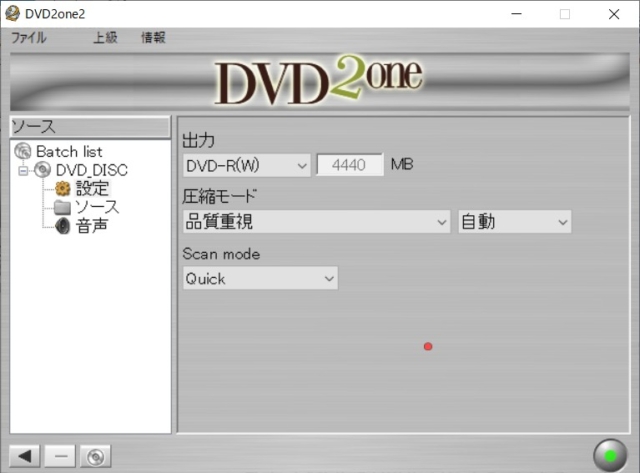 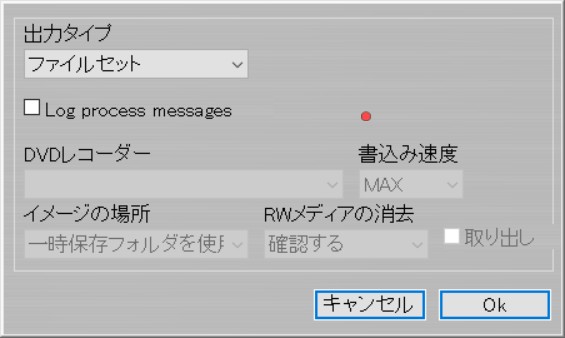 Version 1.5.2 (February 2, 2005)
Added checks to verify the consistency of structures in the IFO files and to correct them if necessary. This solves problems with movie-only copy of Alien Quadrilogy.
Added program chain analysis to detect and remove damaged parts of the DVD for ARccOS disks like Resident Evil Apocalypse, The Forgotten, Little Black Book, The Grudge and Wrestlemania.
Improved IFO rebuilding for full disk copy and relaxed the error handling. If possible the IFO structures are corrected instead of giving an error message and aborting processing.
Improved layer-break removal for full disk copy and layer-break detection for movie-only.

Version 1.4.0 (December 22, 2003)
Added cell/chapter/layer selection for movie-only and join mode.
Split a long movie over 2 disks using layer selection in movie-only mode.
Compile 'best-of’ clips disks using cell/chapter selection in the join mode.
Changed input file IO for movie-only and join mode to random access based on IFO files.
This improves speed considerably in combination with the new cell/chapter/layer selection.
It also speeds up selection of one title from a vobset containing multiple titles.
Added check to verify whether the VOB files match with the IFO files.
This avoids possible strange and unpredictable behavior of the program.
It also avoids incorrect destination size calculation in case the IFO and VOB files do not match.
Fixed a small bug in the seamless join of a titles with multiple angles.
Fixed the problem that an illegal value in the Audio Info field in the IFO file could crash the program.

Version 1.3.0 (September 5, 2003)
Added a powerful new copy mode: the join mode. You can read all about it on this page.
Added default audio and subtitle selection for movie-only and join mode. Just doubleclick on the row to select that language as default.
Added a special feature for join mode to navigate through the different titlesets. Just in case your dvd player does not feature a disk navigator itself.
Fixed a small problem in the compression ratio calculation, which could affect the destination size estimation of the variable ratio mode.

Version 1.2.1 (June 27, 2003)
Fixed the problem with the font that was introduced by adding support for Japanese language.
Added a setting to select the start screen.

Version 1.2.0 (June 18, 2003)
New engine with constant compression ratio for better image quality in long movies (2 1/2 hours and more).
Pre-scanning of files for better estimation of destination size in Full Disk Copy mode.
Detection of encrypted data is now restricted to the data DVD2one actually uses. This should prevent this error to pop up on homebrew dvd’s and unprotected originals.
Removal of unused padding data in the videostream.
Japanese translation added for all honoured Japanese customers. Works only with Windows 2000 and XP.

Version 1.1.3 (April 22, 2003)
Improved the layer break removal in the full disk copy. This should solve problems with menus.

Version 1.1.1 (March 20, 2003)
Fixed a very small bug in the new compression ratio function, which could cause the program to crash.

Version 1.1.0 (March 20, 2003)
Full disk copy mode added. Please note that the image quality will be less than when you use movie-only copymode, because there is more data to copy and also all soundtracks will be included.
New system to calculate the compression ratio. This should keep the image quality more stable.
Improved the progress bar. It should run continuously now for all movies.
Added detection that you try to read directly from a protected DVD.

Version 1.0.1 (February 18, 2003)
Fixed some small issues with the IFO files. This should fix the following problems:
Trial version didn’t work correctly with Sony DVD players.
Some players had problems with NTSC/PAL mix in the IFO.
Some players stutter on the point of the original layer break when 'layer break bit’ is set.
Added much asked feature to choose the destination size.
Added multi-language support (thanks to everybody who made the translations!).
Added support for CopyToDVD.
After processing the result can be directly written to DVD±R(W).
This will automatically deliver a 100% compliant DVD-Video disk, no need to worry about proper settings, directory, file and disk names.
You can buy CopyToDVD here.
CopyToDVD is made by VSO.
New registration code system.
The code from V1.0.0 will not work with this release.
To get a new code, just go to the download page, fill in your email address in the box and press Send New Code.

We just released a new version of DVD2one with the following updates:

Increased maximum output size (was 4 times DL).
Fixed OS-X Lion crash on edit of disk name.
Fixed missing first chapter on titles from discs made with Panasonic DVR (thanks Ron!).
Relaxed the video, audio and subtitle attributes comparison for the seamless join to only compare the essential attributes. This should solve some cases in which the seamless join of multiple discs failed.
Both letter-boxed and pan&scan representation of a widescreen DVD on a 4:3 TV is now always allowed. These video attributes are also not compared anymore for the seamless join.

We just released a small update of DVD2one with the following changes:

Audio Remaster engine again up to 2 times faster. This makes the engine up to 6 times faster than before!
Increased max multiplier value to 128.
Increased the batch list size to 50.

We just released an update of DVD2one with the following changes:

New Audio Remaster features:
Engine up to 3 times faster.
New apodizing function for improved sound quality.
Move songs up and down in the songlist.
Fixed: The engine is now only used when the samplerate needs to be converted or the bitdepth needs to be increased. The previous version always used the engine by mistake.
Mac: OS-X 10.6 (Snow Leopard) compatible.
Several other small fixes.

We fixed the startup problems of DVD2oneX V2.3.1 on Tiger. Just download the app again from the download page, the file has been replaced with the fixed version.

We just released an update of DVD2one with the following new features:

Here is a new version of DVD2one with the following new features:

New option for movie-only and join mode: Target. This option defines what type of output files will be created:
DVD Player: this is the default target and will create a dvd-video fileset that will play on any dvd player.
Media Player: this will output a single VOB file which should play on most media players.
PS3 USB HDD: this is a special mode for creating a single VOB file that will play directly from an USB Hard Disk Drive on the PS3. It does essentially the same as target Media Player, but the output size is automatically limited to 4GB. Also special warnings are displayed for audio and subtitle tracks that can not be played from the XMB. Please read manual for more info.
New advanced option: support for dvd-video filesets bigger than 9GB:
The extra data is place in the 9th VOB file (thanks to Blutach for the idea!).
This option can be used to create large joins for re-encoding with other tools.
The output plays perfectly fine with Apple DVD player, VLC, PowerDVD and Media Player Classic.
Please note that dvd-video filesets bigger than 9GB are not compliant and may not work properly with other 3rd party tools or dvd players.
Fixed incorrect error message when the default output location does not exist (thanks to Aaron for the tip!).
Mac: made work-around for transparency bug in panels on OS-X Leopard (10.5).

Special thanks to Wombler for all his help on this release!

We just released an update of DVD2one with the following new features:

With Audio Remaster you can now master MP1 and MP2 encoded files on DVD. This is for instance useful if you have DVB radio recordings.
Mac: added support for packages in folder browser (like .dvdmedia).
Fixed Hungarian language.

Here is a small bugfix release of DVD2one, which fixes the startup problems that some people where experiencing.

We just released an update of DVD2one with the following features:

We released another update of DVD2one with the following features:

Round Table Knights All Sets mixcloud so ...